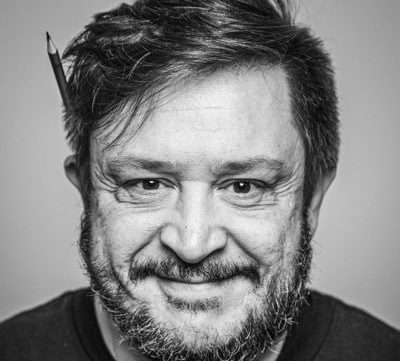 He was born in Mercedes, Buenos Aires, in 1971. He founded Editorial Orsai and Orsai Audiovisuales. He directs the magazine Orsai (chronicle) and Bonsai (for children). He published the novels The kid who ruined the photos, More respect that I am your mother and Six months playing crazy; the storybooks Spain said birdseed, The new fool’s paradise, Talks with my right hemisphere, Messi is a dog and other stories, The best heart attack of my life, The advice of my facho grandfather, All waste reserved, 100 covers of classic stories, the anthology I Renounce and the comic books Twelve summer stories with Horacio Altuna and Papers with Gustavo Sala. Since 2012, he has read his stories on the radio stations with the highest audience, some of his stories on Youtube have more than 6 million visits; the success of those readings caused him to start reading his stories on television and doing story readings in theaters.

He starred in the plays A work in progress, along with real characters from his stories; Tragedies with Zambayonny, Comedies with Fabi Cantilo, Nostalgias with Cucuza Castiello, Drawn Tales with Horacio Altuna, Wild Creatures with Gustavo Sala and the one-man shows It Seems a Lie, A la carte and Pure Story; in addition to writing the works Stay with me Lucas and More respect that I am your mother. Since 2021, together with the Orsai Community, it has been developing audiovisual projects together with thousands of producing partners. In 2000 he settled in Barcelona. He had a heart attack in Montevideo in 2015. Since 2016 he lives in Buenos Aires.

What happened to the man who saved my life

It is often believed that secondary characters —in stories— don’t have much to tell, but life itself taught Casciari a lesson. Javier Artigas, a secondary character in one of his stories, is the protagonist of an incredible story. So much so that it couldn’t be fiction. Guaranteed to be the best story you are going to hear this year and it is a true story that happened to the writer Hernán Casciari, which became a published story and will soon be made into a film in a co-production between Spain and the United States.